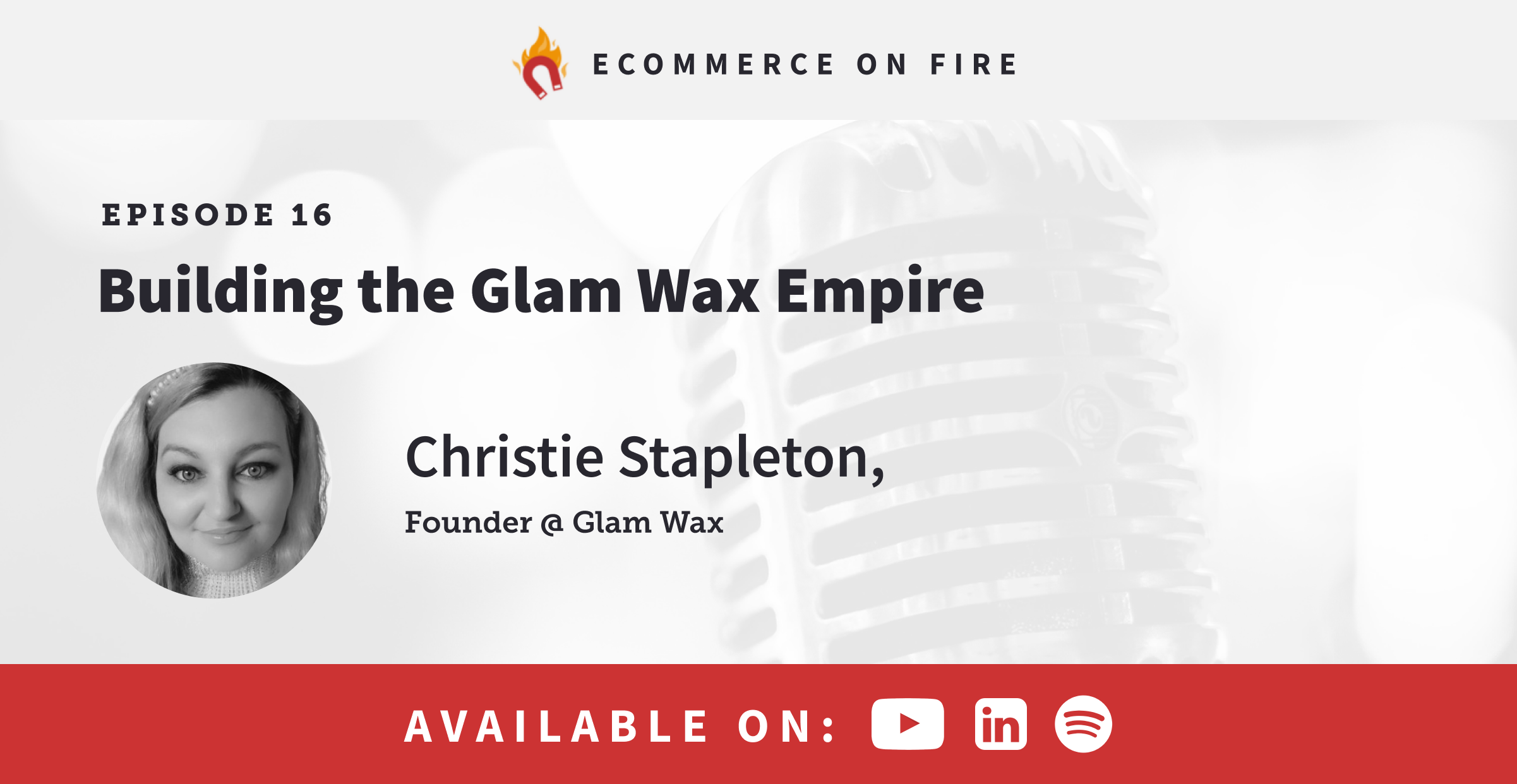 Glam Wax is one of the UK's fastest-growing fragrance companies. In just over 2 years, CEO & Founder Christie Stapleton has moved from her kitchen apartment to over 3,000 sq ft of facilities to accommodate the demand for her homemade wax melts and candle ranges.In this interview, Christie discusses:- How she sold over 150 products over a couple of days which allowed her to see a clear product-market opportunity and fit- Using Instagram influencers to grow the brand- Why Glam Wax is investing in organic SEO for long-term results in light of the new iOS 14 privacy updates potentially harming their acquisition strategy- How Glam Wax approaches its Facebook & Google Ads strategy with low ticket items and increases their Average Order Value (AOV) with upsells and Shopify appsLearn more about Glam Wax here: https://glamwax.co.uk/

Christy, how did you start with Glam Wax? - So one day I was just at work and someone had ordered some wax melts, and I was like: “What is a wax melt?” I didn't even know what a wax melt was, and they looked really cool and they were like scented candles. So I wanted to buy some, and I really struggled to find a fun young brand that represented me, it was all quite plain Jane older customer targeted, so I thought I'm gonna make my own.

And in the kitchen, I was melting wax, creating fragrances, I thought that looked pretty cool so I just put it on Instagram: “Would anyone be interested in trying these or want to purchase?” and I had 150 orders that week. I was working full time at the time and I didn't have a website, people would just have to message me on Instagram to order, as you can imagine, What scent do you want? What's your address? What's your Bank details? And I was just getting all these messages while I was at work so I realized pretty quickly I had to hire an additional pair of hands to help because once I finished my work day shift, I’d come back and I'd have to restart whilst someone else would have to pack the orders. And it was just trying to keep on top of it from there really and then within two months, I had to quit my job. It just kind of took off quite quickly and it got to the point where I was getting so tired so           I had to make a decision and I thought: “Right, I'm just gonna give this a shot because I think I regret it otherwise”. And Yeah, we're approaching a second birthday next month.

Did you research how to do this online? How did you create the first product? - There were some Facebook groups, I watched a couple of YouTube tutorials, I just kind of wanted a new hobby, really. I wanted to try candles but candles are very complex, so I started off with wax melts and we've only just launched candles actually about a month ago, we got there in the end. And now we have bubble baths, we're currently developing our own bath bombs and potentially some other new products as well.

What made you realize that there was a position in this space? Who were the traditional players in the space before? - Well, for example, it's hard to buy wax melts in

a shop. Currently, more retailers are onto the trends, especially, for example, like B&M and Home Bargain have wax melts. I think it's just because of the Mrs Hinch effect, so those sort of cleaning community people can access wax melts, they're very cheap and cheerful you can buy a pack for a pound but their scents are not great quality.

Or you could get, like, top notch, super expensive with quite white, plain branding.
So there was just a huge gap in the market and I was our target market because I wanted the wax melt and I couldn't really find something as I didn't want the 1 pound ones and I didn't want to pay 10 pounds either. So I just thought I'm going to create a product to fulfill that gap.

So how did this start off? It sounds like that was important in the beginning, and it

was quite organic in the words of mouth. How do you acquire customers with your ad strategy? As you've scaled up the production, how have you translated that across to paid acquisition as well? -  I had a home interior account on Instagram and I only had about 1,000 followers. So it wasn't that many, but I managed to convert about 20% over to Glam wax. I love Instagram and we've had such a supportive community on there.

To acquire new customers we do paid Facebook ads and we usually get around six times return, which we’re quite happy with. We haven't used Google ads, but we're starting to look into that. And then for Instagram, I love gifting influencers, especially microinfluencers, because they're just so excited that a company wants to collaborate with them that they just seem really genuine with what they share, while we have also worked with a couple of paid influencers and we paid quite a bit of money and we’ve seen much less return, although they had about 100K to 200 K followers, maybe because it doesn't seem as genuine to the customer.

How did you find those micro-influencers on Instagram? Are they approaching you or are you just sort of expanding a certain amount of time each day trying to vet influences? - Well, I kind of had a good relationship with a lot of people that we interact with, and some of them have quite big accounts, so I just said: “Hey I’d love to send you some product to try” and we find it's almost like “try before you buy it”, because about 75% of the influencers we gift actually become customers.

Let's talk a bit about giveaways, how effective have they been for you, if you run many of them in the past? -  We've been quite lucky because the giveaways we've been in have definitely helped build our brand exposure. So we've tried to work with brands that might be in a slightly different market. For example, all shook up drinks who do the cocktail cans in the supermarket, we paired that with a porn star Martini reed diffuser and we managed to engage with some of those customers that everyone has to follow you as well as the other brand. We do get some customers from it as well and we haven't noticed particularly a drop off after the giveaway ends either, so we've managed to retain those followers.

So what else have you been doing? Obviously, Instagram is very important by the sound of it, but what other strategies have you implemented to grow the brand? -

I wanted to get a female founder story out a bit and I’ve been sharing progress of the business. We've actually got some great opportunities from having a LinkedIn account, for example, I've had discussions with American distributors, UK distributors, all because of LinkedIn. I don't think they would have found me otherwise or I wouldn't have found them. And it's kind of flattering to have these accounts reach out to you.

Any SMS?- No, we haven't. I think: “ Do I want a text?. Definitely not!” but it might have a great conversion rate so maybe I should look into that.

What are the most important apps and software that you've used to grow the store to date? - So I realized quite early on that SEO was definitely something that we should look into, and we've been working hard on our SEO returns. And I saw that you quite often interview Sylvia at Pink SEO and she uses Semrush and we also use Semrush finding that it helps with what keywords we should be trying to rank with, where's the gap in our strategy, backlinks we need to work on. We're definitely going to work a lot more on SEO, especially after the new IOS 14 update. And we also have the recharge app, and we've just tried a new one on Shopify, and it's called Free Gift where you can actually offer a free gift in the checkout cart to increase average order value. And we have seen a great spike in people hitting the 30 pound marks in order to get the free bath bomb. We've definitely seen great returns on that already.

That's interesting that you talk about SEO, though, because I feel as though in Ecommerce, there's been so much focus on the heavy acquisition strategy to grow, and people have almost neglected SEO but as you said, with the change that’s happening to ads at the moment, it's definitely a great area to invest. -
I definitely agree. We keep increasing each month due to our SEO efforts on the organic traffic. My goal is to be on hopefully the first page on Google for wax melts, but we've got a lot of work to do, it’s very competitive.

What are the biggest challenges that you faced growing the company? You went from your kitchen to a new facility, how's that transition been? -  It's actually been a bit weird because I'm not used to managing staff, We've got about four members of staff and I'm just like: “Okay, how do I track what everyone's doing?”. So just learning leadership and management has been a challenge because I wasn't really expecting to do that.

Another challenge we had is when we moved into our new warehouse about two months ago and a key member of our stuff quit because of the commute. It was almost overnight so suddenly it was just me in the office and that was quite stressful.

What would your advice be to other people starting out in the space? - Definitely have a better connection with your customers, listen to what they want, what they want to see product wise in the market. It just really helps you with new product ideas and I find if you listen to them, then you'll be rewarded with loyalty. I keep releasing new products and I'm releasing some new stuff for retailers in the next week or so. 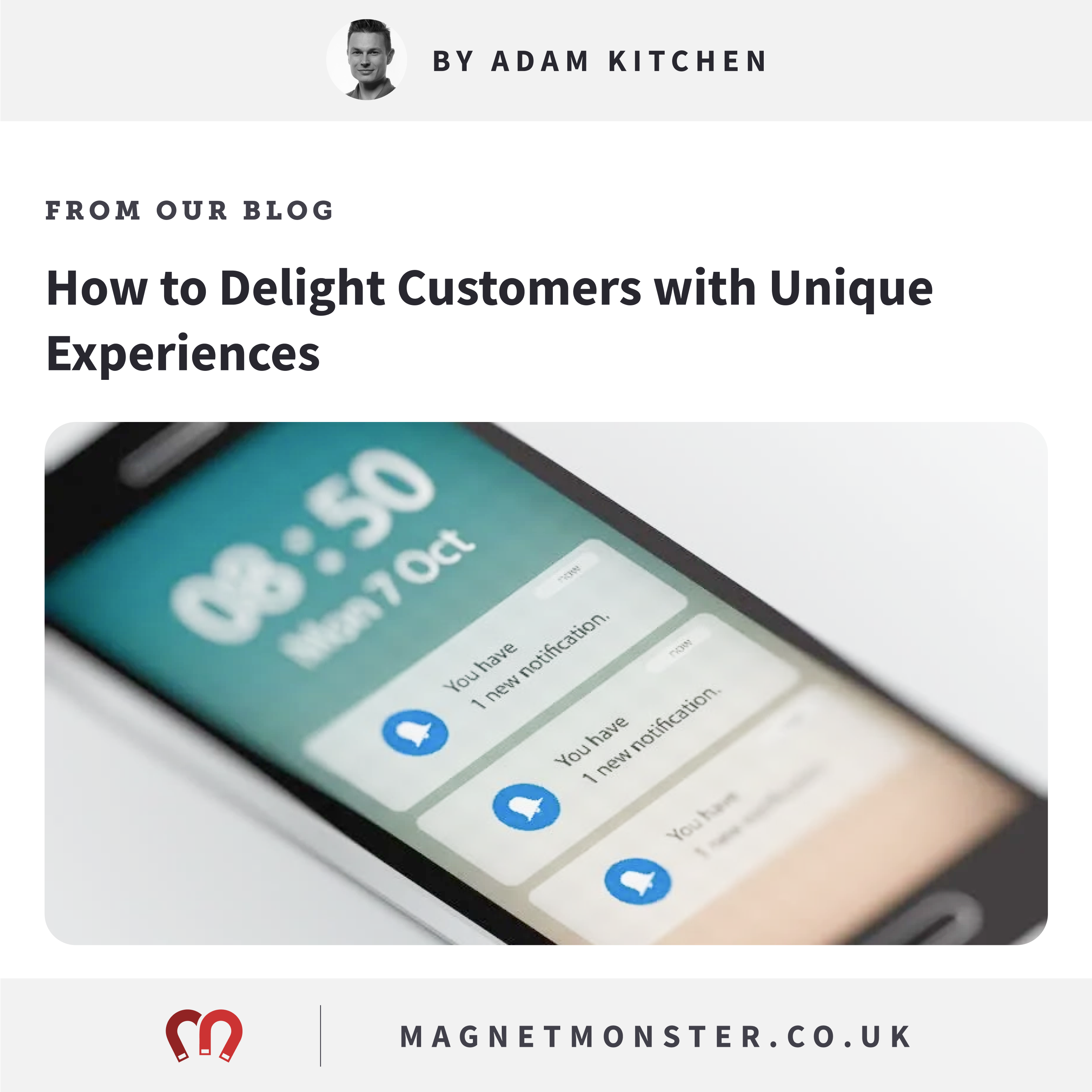 How to Delight Customers with Unique Experiences 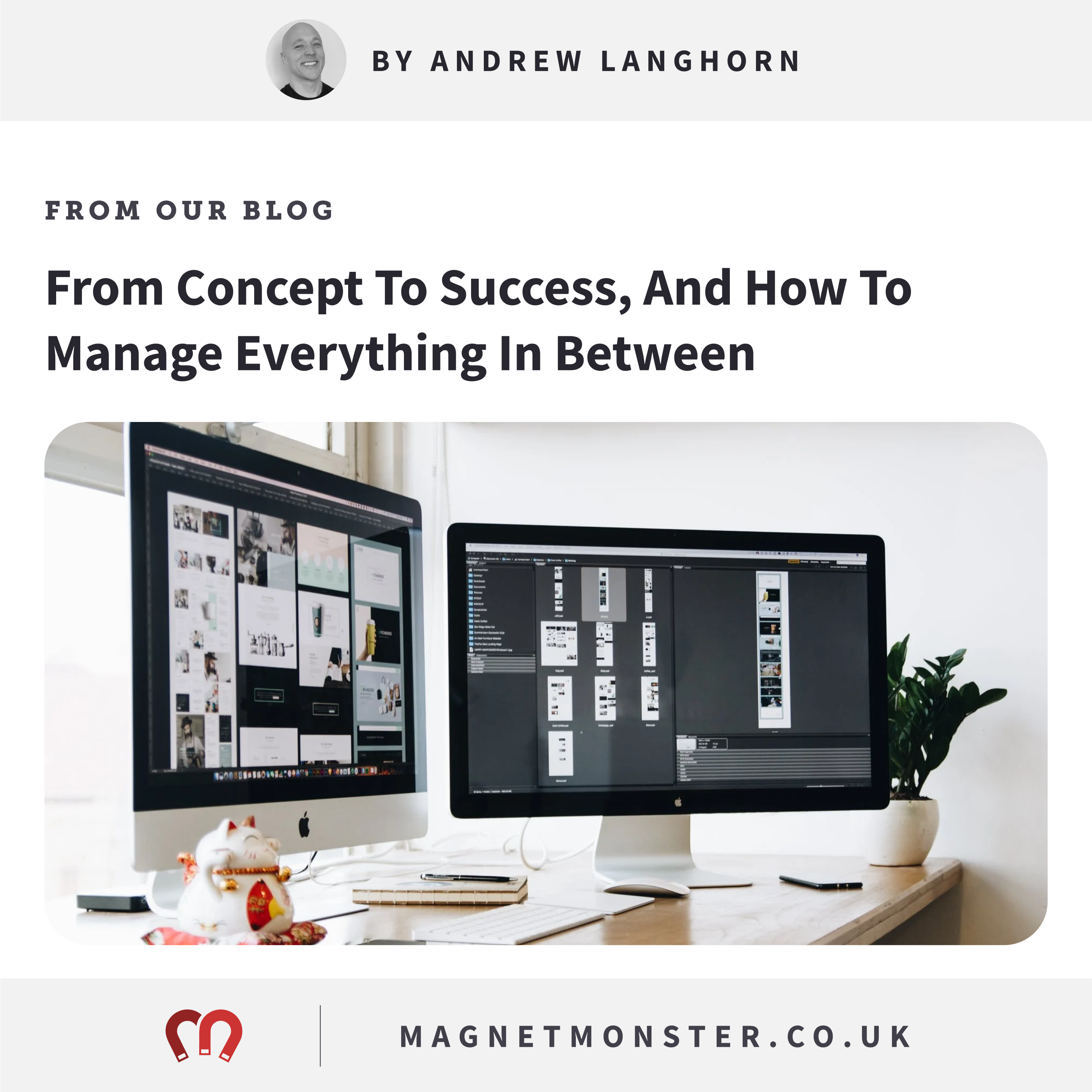 From Concept To Success, And How To Manage Everything In Between 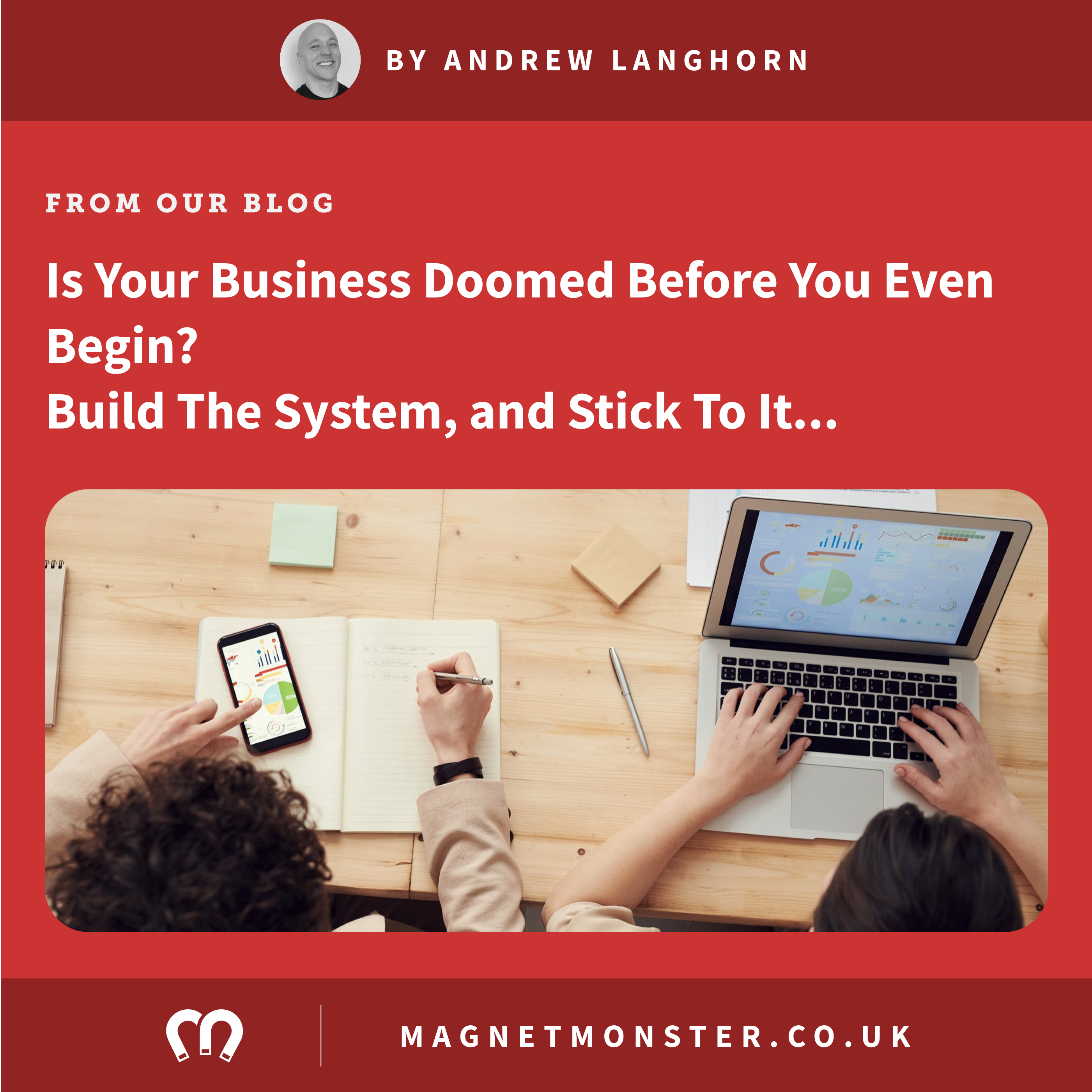 Is Your Business Doomed Before You Even Begin?